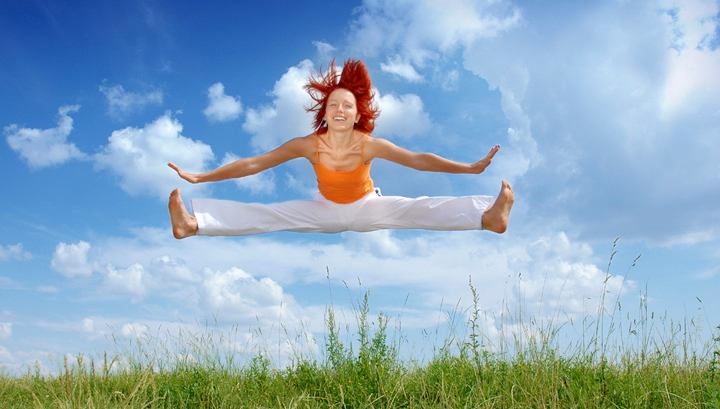 Spring Fling – Avoiding Injury while you get back outdoors

That big sigh of relief you may be hearing is the collective call of Canadians that one of the worst winters on record is finally over. Probably.
In case you haven’t been in Canada very long, spring is when windows may be opened again, and people are donning shorts even though it’s only 5 C outside. Many people may regard Canadians as “crazy Canucks,” but when you’ve been cooped up for five months, you can go a little crazy waiting for that first sign of a tulip starting to rise.

However, there is one problem with spring: Many of us take it a little too easy over the winter and wind up putting on a little extra weight, so when the warm weather finally arrives, we take to the streets faster than a fly to you know what. We want to lose that excess poundage, but we often try to do it too quickly and injure ourselves. Let’s investigate a few ways to avoid those early spring injuries.

One of the biggest threats every spring comes from the sudden melt of all that snow. This year, more than 400 centimetres of snow fell on Ottawa, and when it melts it ends up in culverts, streams and rivers and can run at an incredible pace. Always keep kids away from fast-moving water in the spring.

Another sure sign of spring is seeing all the runners attacking the roads. For most of us, training indoors on a treadmill is reason enough to go insane. I had a patient recently explain that she was training for last weekend’s Paris marathon, and had to do her long runs — up to four hours — on a treadmill. I find after 30 minutes that “stop” button looks awfully tempting.

The runners who need to be wary of early spring injuries are often first-timers. Studies show that first-time runners are likely to suffer more injuries because their bodies are going through enormous stress. For each mile run, a runner’s body will have to withstand up to 1,000 tons of force. First timers need to follow a very structured program to avoid injury problems.

Another good rule to follow when beginning any exercise program is to start out with only three days of activity per week. As the head therapist of the Mississauga Marathon, every year I see runners who try to train for the big race in only a few weeks. They run five to seven days a week to try to make up for time lost to winter weather. Do that, and you may as well book your therapy appointment now.

When you start seeing runners on the roads, the cyclists won’t be far behind. Just like treadmills, a lot of cyclists ride indoors (on specialized wind-trainers) during the winter to keep up their training. But cyclists should be aware of post-winter hazards before getting out on the road again. Salt or sand spread on the roads to help with vehicle traction can be a cyclist’s worst enemy. A good friend had a horrific accident last year when her wheels went out beneath her after she hit some leftover sand from the winter. She was wearing a helmet, but due the severity of the accident, she still had a major head trauma and had to be airlifted to hospital. Always be careful when riding by the side of the road and watch for the gravel and sand.

For riders of all skill levels, the most important consideration is a good helmet. Head injuries account for more than 62 per cent of bicycle-related deaths and 33 per cent of bicycle-related emergency department visits. Check your helmet to make sure there are no cracks in either the shell or interior foam. A small crack can significantly decrease the helmet’s ability to absorb shock, thereby increasing your risk of head injury.

Helmets only have a limited shelf life. The foam (commonly EPS, or expanded polystyrene) will harden over time and will lose its ability to absorb the shock of a fall. Check your helmet before your first ride of the season and see how old it is.

Several provinces have passed legislation making it mandatory for anyone under 16-18 years old to wear a helmet while riding a bicycle. I would like to see helmet use mandatory for all ages. Saskatoon’s city council voted unanimously against mandatory bicycle helmets in April 2007, arguing that such a law discourages recreational exercise during an era of record obesity.

Inline skating is another common pastime that brings out the people in the spring. If you haven’t done any skating in the winter, your first few times on the blades might leave you feeling slightly off balance. Be prepared and dress appropriately. A proper helmet, knee and wrist guards are invaluable. I have seen too many wrist fractures due to people not wearing the proper gear. Again, a lot of people are not wearing them because of their appearance. Perhaps they feel a cast on their arm for six weeks would look better.

Spring is finally here, so make sure you warm up properly and stay within your limits. Have fun and enjoy it. Soon, it will be too hot and smoggy to do much of anything outside, and you’ll be looking forward to those cooler days of November.