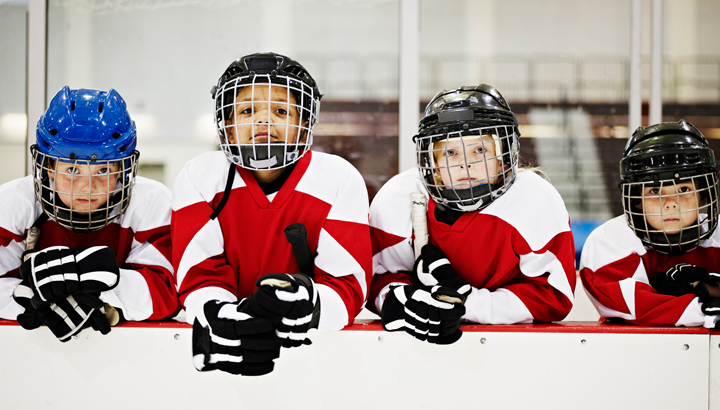 When the season gets into into full swing, nights and weekends are again spent at the rinks. You checked out your child’s schedule last week and discovered you have two games, two practices and a tournament next weekend. If you are lucky, you and your will spouse will see each other in passing before the snow melts. This is when the question arises, how much hockey is too much for your child’s safety and health? No one can really answer that with a definitive answer.

Sports participation in the 70?s and 80?s used to be pretty simple. The kids played hockey in the winter and baseball/soccer in the summer. Rarely were there players that played hockey all summer. It was probably due to the lack of arenas, but the desire to take the summers off was greater then. The children would look forward to the end of the season in March, to venture of to the grassy fields and try different sports. Come September however the kids could not wait to get back on the ice and try out those new skates or shoulder pads, and see their friends again. In the early 90?s to 2002, it seems to be a different story. Many players and coaches feel it is necessary to play hockey all year round to become the best player possible. Ask Wayne Gretzky what he did in the summers between hockey? He will tell you it wasn’t hockey. It has been shown that extended periods of intense training can actually cancel out some of the benefits of physical activity and possibly lead to injuries and other problems.

How much is too much?  There have been several attempts to try and answer this question. The first one is to let your child decide. When your child stops having fun, it may be a sure sign of burnout. Your child?s health should also be first and foremost. If they are getting run down and tired because every other night they are on the ice, without a break for 12 months, it will only be natural that their body will break down. Here is a list of signs that your children may be overtraining and that performance needs to be decreased or levelled off:

School should be a large factor in determining if your child is playing too much. If they are not getting their homework finished or incorrectly, it could be they are too tired to concentrate, maybe they are involved in too many extra-curricular activities. Monitor their school grades throughout the year; see if they are declining around play-off time or around tournaments.

Sometimes a child does not want to disappoint Mom or Dad and will not admit they are tired of playing hockey. Once in a while, it may be a good idea for the parent to decide it may be time to take a season off (usually summer). How your child reacts to the break will give you a good indication as to whether it?s a good idea to cut back next year. Maybe house league is a better option instead of AAA hockey next season.

Last but not least, take your own health and feelings into account. If running your child to practices every night, while your spouse takes the other one to dance, it may be time for you to take a season off also. There has probably been more than one divorce over the course of the hockey season due the parents never seeing each other. Making time for yourselves is sometime just as important as making time for them. A separated family will only make it tougher getting to all those games and practices.

A well-balanced sports participation can be an important part of a child’s social, emotional and physical well-being. Let’s just make sure that we are not pushing them over the edge to train more that their little bodies will let them. If you are seeing the signs of overtraining or exhaustion, make the point to your child that “this is too much hockey”